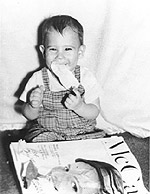 I have always liked words, pictures, and books. I started out eating a few. Perhaps someone said, “Here, read this,” and I misunderstood and thought they said, “Here, eat this.” I knew nothing more about books than your little brother or sister, or perhaps you did as a baby. I wasn’t born a writer. Like most young children, I started off turning the pages, wrinkling, and unfortunately, eating some of the first books I encountered. Later my interests expanded.

When I was four and a half years old, my family took one of our first long trips. We drove down the east coast to Florida. Somewhere along the way, we passed an alligator farm. My parents thought I would like to have my picture taken with the alligators. You can see the look on my face as I noticed what big teeth they had. I didn’t particularly like way they were smiling. I thought they might make me their lunch, or at least dessert. Fortunately they had just eaten. This was among the adventures that influenced my writing and illustrating. 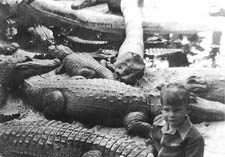 As I learned to read, I went to the library as often as I could to find books that would take me on new journeys. I also continued exploring the outdoor world. I once got stuck in quicksand in the wilds of Baltimore. I had a variety of pets— frogs, cats, dogs, and found injured animals such as birds and rabbits that I would try to nurse back to health. At one time I had thirteen box turtles, all named “Bobby” since they looked so similar. The number of turtles in the outdoor pen climbed and fell, but they all dug—sometimes individually, then en masse, escaping by tunneling under the pen fence and teaching me that even turtles have surprises to offer. My own scientific pursuits did not escape then, just took new paths.

There were a number of great storytellers in my family. One of my grandmothers told me amazing stories about her childhood, which along with our close relationship echoed through the books ABUELA and ISLA. My father would make up stories with fantastic characters. “I Fry’em Fine,” a character in my first book, PRETZELS, grew out of one of the stories he had told. My mother encouraged my drawing, providing materials and mostly putting up with the paint I spilled on the floor. A grandfather occasionally sent me letters, each with a similar bird he had drawn. He did not fancy himself an “artist,” but he showed me that words and pictures can be an exciting part of anyone’s life. A high school art teacher, “Ms. J,” helped further that belief as she reawakened her students’ creativity.

As I grew older, I worked at a variety of jobs—carpenter, photographer, longshoreman, agricultural worker, teacher, and enjoyed aspects of each, particularly the diversity of what I was able to learn and the people I met. Whenever possible, I traveled to lands I had read about before. All the while, I continued on my own to draw, write, and be interested in books. So at about age thirty, I decided that it would be great fun to put those interests together and make children’s picture books. 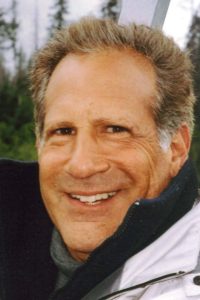 I have now been enjoying writing, drawing, and making books for many years, with more than thirty published titles. Working on each new book is exciting for me. I’ve found a wide range of subjects and experiences surfacing in my work, from interests in science to high-flying adventures, from the usually unseen—trees growing, to the unlikely to be seen—flying grandmother and granddaughter. I believe that everyone has stories to tell. I’ve enjoyed visiting children in hundreds of schools around the country, helping them find their own stories. Part of writing and illustrating is like being a detective, with senses as alert as possible, always on the lookout for new ideas and pieces that help put the whole story together.