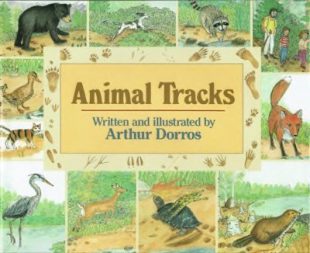 By: Arthur Dorros
(Scholastic, 1991)
Ordering Information
Activities for this book

Have you ever wondered who made tracks in the soft mud by a stream or whose tracks are the curving lines around a puddle? Guess which tracks you are seeing and then find out in this book. Learn to identify animals from tracks and animal signs, and to make plaster casts, track tracings and track “traps.” Become a track detective in your own backyard.

"The pictures are realistic and varied..The book is attractive enough to catch the interest of budding naturalists and interesting enough to hold it."–Booklist

"With its simple text and guessing-game format, this book invites children to explore the animal world. The colorful, detailed illustrations show a range of animal footprints."–Sesame Street Parent's Guide

I’ve often looked for animals. Some of my friends and family still comment on my observations of animal tracks and signs, such as scat, as we hike in the mountains, on beaches, the shores of lakes or rivers, or even in city parks.

As a child, I found lots of tracks in the snow in winter and on stream banks in warmer weather. The banks were winding trails through the forest, and in the soft mud or sand I could see where raccoons had come to catch or wash food, where frogs had hopped or turtles crawled on their way to or from a swim. Sometimes I could even see tracks underwater on a muddy stream bottom where crayfish had crawled, and I searched for the quick, lobster-like little creatures. When frogs or turtles inevitably leaped or dug their way to freedom, I tried to track them. But they were great escape artists. I left my own tracks in many a field and forest, particularly near the house where we lived in Baltimore. I also left one of my shoes when I stepped into quicksand. Not a good thing to do! The shoe got slurped deep into the sand and stayed there when I pulled my foot out. I had to walk home with one shoe, leaving an unusual set of tracks.

When tracks aren’t visible, there may be other animal signs such as the white patches on tree trunks where a beaver has recently chewed, holes in bark made by woodpeckers, or the swirling patterns of scratch marks left by bears. Even in the city there are all kinds of tracks-raccoons, opossums, birds, dogs, cats, the odd human, and occasionally coyotes and cougars have been known to leave their tracks. I’ve seen a few of these tracks in my own back yard. You never know what tracks you will find.