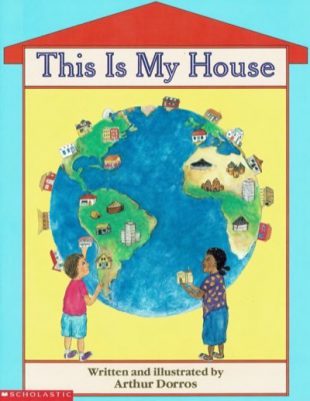 By: Arthur Dorros
(Scholastic, 1992)
Ordering Information
Activities for this book

All over the world people make houses from whatever materials are available. Open your front door to find the similarities and differences in housing structures around the world. As you read about the different dwellings, you can learn how to write and say “This is my house” in 17 languages. Whether houses are big or small, on water or land, the people who live in houses make them their homes.

"...A worldwide trip to see and learn about people's houses of all descriptions. There is unlimited value in the succinct, interesting text and pictures that 'show and tell' just how and why these structures are built. Varied lifestyles, climates and available materials...young readers with access to this engaging book will readily grasp the concept."-School Library Journal

"...A useful starting point for children's own explorations of their communities."-Publishers Weekly

"Have you ever launched a curriculum from just one book? This one is full of possibilities."-Scholastic Early Childhood Today

I started out building small huts from branches and leaves, my own ‘houses’ just big enough to crawl into, when I was just a few years past the crawling stage. When I was old enough to handle a few tools, I built tree houses in a couple of huge willow trees behind our house. My brother, sisters, and friends would climb up there too. A box on a rope to haul things up and down or between the trees, was the most advanced technology attached to those tree homes. But I found I liked building places to be.

When I began working, some of my first jobs were as a laborer and carpenter’s helper on construction sites around Washington, D.C. We didn’t work on the White House, but I learned a lot about how houses were put together, as well as a few things I didn’t expect from some of the older construction workers, one of whom specialized in weird nailing techniques. After a few summers learning the basics, I started taking on construction jobs by myself, with friends or occasionally with my brother. Most of what we built seemed to stay in place. I continued to work building and fixing up houses for many years. Then on one remodeling job, several children started swapping stories with me, and partly out of that experience grew my idea to put together my interests in books, writing, drawing, and storytelling to make picture books.

Over the years I had traveled a lot, and I would often stop to watch as people skillfully built houses out of the materials around-stone walled buildings in the high mountains of South America and Asia, houses of wood beams and woven plant mats in the South Pacific and other tropical regions, adobe houses in Latin America, wood-frame houses in areas where forests provided those materials. It was interesting for me to see the designs people used, some were very similar from region to region, and others distinctly different. All along the way, people would warmly invite me into their homes. We talked as best we could and there was most often the feeling if not the words, “Welcome, this is my house.”