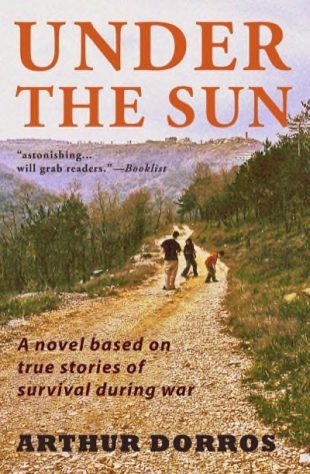 A determined and resourceful teenager named Ehmet, after losing his family decides to make a courageous journey across the war torn frontier of Bosnia. As he makes his way from what was his home in Sarajevo to try to find a village he has heard of– where young people from all of the different backgrounds involved in the fighting are now living in peace– Ehmet must use his wits to survive. He has to avoid conflicts and capture, remains invisible by traveling at night, gathers food from forests and rivers, makes his own shelters, navigates by the stars, while trekking more than 400 miles. The journey and the remarkable village Ehmet is in search of were inspired by actual people and events, and reflect the incredible resilience, strength and creativity of people who overcome all odds to build new lives.

"The facts are astonishing, and the contemporary war docunovel will grab readers."—Hazel Rochman, Booklist

"Survival, hope, and strength from family and friends are all important in this story. A boy who once had a life not much different from most teens', faces it with courage, integrity, and a fierce desire to find his family and a place to thrive. Dorros selects his words carefully, creating wonderfully descriptive phrases."—Susan H. Levine, VOYA Magazine

"The book participates in a long tradition of war narratives, such as Rifles for Watie, The Red Badge of Courage, and My Brother Sam Is Dead, that provide similarly comprehensive treatments of their conflicts through the experiences of a single character. The result is an action-packed, fast-paced narrative with a satisfyingly optimistic outcome."—The Bulletin of the Center for Children's Books

"I would recommend this wonderful war book to anybody. I could not put it down."—Z.R., Flamingnet.com, (reviews for young adults, by young adults). Rated 10 on a scale of 1 -10.—S.C.

"I loved this book. There was always something happening and there was also a lot of detail. Dorros did a good job of keeping everything so unpredictable. I can imagine this being a true story. I especially liked the ending. This is the kind of book that sparks opinion. It makes you feel like talking to the book saying, "No, don't do that!" or, "Wow, he's lucky that he escaped them."-C.A., Flamingnet.com

"It is not only a very captivating and moving story, but managed to capture the typical atmosphere of the different regions where the events take place and the people living there. And at the same, they are so universal that anyone could recognize himself in them. You show that these people could live in any other place on this planet, that conflicts like this could happen everywhere and have little to do with problems between ethnic groups. I loved the way you showed that in situations of despair and darkness, the light can still be present. How people who experienced great tragedy don't lose their sense of humor. How physical loss not necessarily destroys the human spirit." —Odilia Rojnic, Nadomak Sunca, Oprtalj, Croatia

"A vivid description of the Bosnian conflict through a sympathetic and compelling character. Ehmet's story demonstrates the futility and destruction caused by greed and ancient conflicts, but the novel also offers a vision of hope based on tolerance and compassion. Of particular interest is a diverse collection of compelling characters Ehmet meets on his journey in search of sanctuary. Under the Sun is a memorable story."—F. Todd Goodson, ALAN Review

This story snuck up on me. A couple of friends told me about a peaceful ancient village in Croatia being rebuilt by a group of young people and a few adults, who had survived war. For years I had heard, read, and seen news of conflicts in the region-what had been the country of Yugoslavia. One thing that amazed me about this village was that the residents were from different ethnic and religious backgrounds, yet were living and working together, when the wars had often been portrayed as having been caused by ethnic hatred. It made me wonder what the journey through war might be like, and if what I’d heard about the conflict, and the village, were true. 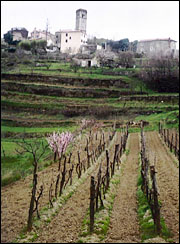 I saw photographs of the village and heard more about it. In the picturesque medieval hilltop village that had been largely abandoned in past decades, walls were being re-fitted stone by stone, cement re-smoothed, red tile roofs patched. Families were being re-formed and were growing like the newly planted gardens around them. I could imagine a survivor of war torn lands wanting to find his or her way to such a place.

Before I visited, I wondered if the village was really as great as it sounded. I was surprised to find that in some respects it was even better than described. This peaceful place was being rebuilt with the imaginations and efforts of four hardworking, warm families, each composed of about ten children and foster children with an adult couple dedicated to being mother and father, and providing home.

This story is not meant to directly depict those people or that place, but was inspired by them. It is the story of a boy making his way through war to a place of hope. As I wrote, I read news articles, histories, and memoirs, talked with people who had lived through these and other conflicts. I traveled the area, walked across the countryside at night, and drew on experiences in the woods-gathering food, keeping warm, finding shelter and direction. I remembered my own family’s stories of making ways through the war-shredded Eastern Europe of an earlier time-hiding in hay wagons, skating by border guards-in order to awake in places where life and hope could thrive. One of my grandfathers crossed a border by popping on a baseball cap, smoking a cigar, leaping from a train-and found himself in a new land.

Some of the children and adults at the real “Children’s Village,” in Croatia, that inspired this story came through extreme experiences of war, yet continue demonstrating ways to put the pieces together with energetic joy. Not long ago, I saw artwork by a few of these kids. A caption on a drawing of one of the new homes read: “This house is for me a golden sun. I am telling you the living truth, the truth that comes from my heart.”