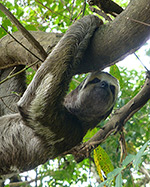 From my early years chasing frogs, salamanders, and turtles (usually easier to catch up with), to sitting on the tail of an alligator, the natural world has been captivating. Before I hit my teens I read about the tropical forest in a book about the voyage of the Kon-Tiki, which definitely whetted my interest in South America. A huge map left by a former resident in a house I lived in as a boy also helped. The map covered almost an entire wall, and I would move my bed around so the Amazon or African rain forest areas were just above me.Later, these interests and explorations were turned toward books including Rain Forest Secrets, Animal Tracks, Ant Cities, A Tree Is Growing, and more. Not long ago, I visited the Amazon where I could hear the roars of howler monkeys that I had written about recently in Animals Talk. The booming calls of howlers echoed morning and evening through the forest, punctuated with the chattering beat of cicadas and bird song solos. 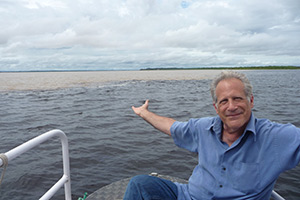 Meeting of the Waters

I started onto the river near the dynamic “Meeting of the Waters” where the light-colored, sediment-filled Amazon meets the dark, tannin colored water of the Rio Negro. The two currents flow in distinct color bands next to each other for miles before the waters mix to become the even wider Amazon downstream. Nearby, the rich waters help keep the forest growing. Caimans pop their eyes above the surface as they float pretending they are logs, the odd snake swims across, alarmed iguanas do high dives from the trees, splashing loudly into the water to swimming escapes from any perceived enemies, sloths hang out peacefully in the branches above munching on leaves. Both gray and pink dolphins leap and dive, birds, piranhas, angelfish and many more ride the currents. All in all, plenty to find in the Amazon if you are interested.