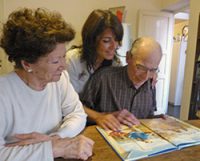 Where do stories come from? Sometimes we have to travel to find them, journeying within or experiencing what happens in our paths along the way. Recently I was taking a new book, Abuelo, to Argentina, to people who had inspired it.

People arrive, events occur, that later become essential stories in each of our lives. Clearly, what becomes important is not the same for each person. But often, the stories that happen while we are young stay with us, and can help carry us through the rest of our lives. For my friend Aldo, who is Argentinean, riding La Pampa, the wide plains and foothills of Argentina when he was a boy with his “Abuelo Gaucho” — Grandfather Cowboy — has given him stories, a relationship and a strong place to return to that have helped him ride free through the years. 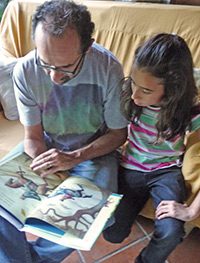 Aldo’s great grandfather Redmond arrived from Ireland in the 1840’s to a land that “had a lot of beef.” Argentines come in all colors and with names from many cultural backgrounds — from English to Italian, Lebanese to northern European, not just the Hispanic surnames that many associate with Latin America. Aldo explained to me that the popular way to address someone in a friendly way, saying “Che” — something akin to “hello friend” — likely comes from a Guarani Indian word. Like the US, South America is a quilt built of many cultures, from Indian to European to African, and more. But back to Aldo and his young days riding the range with Abuelo Gaucho, that first inspired me to write Abuelo.

As a boy, Aldo lived in a small town in La Pampa where raising cattle was a major enterprise. Cowboys — called gauchos — rode through the streets and sometimes brought herds to load onto the nearby trains. Aldo’s father worked for the railroad. Aldo would see the gauchos in town, and one older gaucho who knew his family well would say to Aldo that he should learn to ride a horse and the ways of the gauchos, that he would teach him. With the permission of Aldo’s family, on Sundays, the gaucho’s day off, the old gaucho began to teach Aldo — first to ride, how to guide and talk to the horse, how to find his way securely on the pampas. Over the years they rode out, the old gaucho on his horse, and Aldo on his own. Grandfather, or Abuelo, Redmond had died before Aldo was born, and so the old gaucho became like a grandfather to Aldo.

The author, Aldo and Abuelo

When Aldo grew up, he moved away from the small town of Roberts and “Abuelo Gaucho” to the city of Rosario to find work at a newspaper, and eventually for a bank. Throughout many changes, Aldo could return to La Pampa and Abuelo Gaucho in his mind. At a bank meeting that was droning on for hours, Aldo, who had been very active and successful in his work, was silent for a time. When someone at the meeting looked at him being so quiet and asked “where is Aldo?” a friend who knew him well said, “he is on La Pampa.” Throughout his life, he has found strength there.

Now in his eighties, Aldo says that relationships between people are most important. His daughter and her family, his grandchildren live nearby. They know some of the great stories of their Abuelo Aldo, and his wife, Abuela Delia, who is a wonderful artist. Among the drawings I admired in their home was one of a gaucho, which thanks to Delia I now have with me. More tales there. I watched as Aldo saw and read Abuelo for the first time. He smiled at connections to places and relationships he has known so well. When I visited granddaughter Victoria’s school, the students, who see gauchos still, recognized the story and beautiful pictures drawn by Raúl Colón, cheered, and raced to tell new tales they found in their own lives — a fountain of youth and stories. 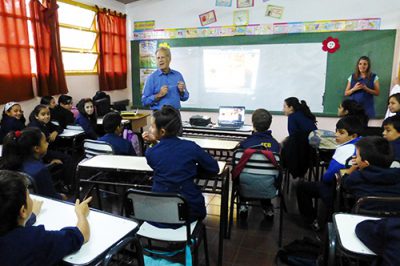 Speaking with students at Victoria’s school 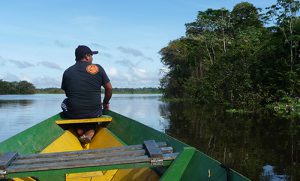 FIND OUT MORE ABOUT THE AMAZON