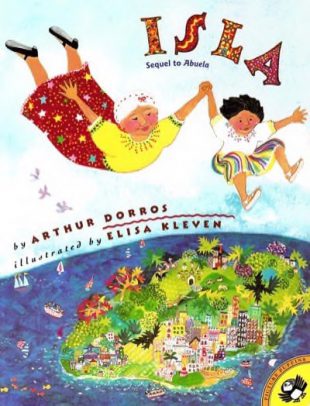 Spinning through the air “like big birds playing,” Rosalba and her grandmother, Abuela, soar again on the magic of Abuela’s storytelling and Rosalba’s imagination. Together they fly to la isla, the island where Abuela grew up. They explore the bright tropical island-from the busy old city and the lush rain forest to the welcoming home of relatives where they share more of the family stories that can bridge time and distances.

"Dorros's language is rich and magical-readers fly to la isla, too. An enchanting journey through the imagination that is delightful for sharing again and again."–School Library Journal

"Vivid illustrations with myriad details bring the tropical scenes to life, and the well-chosen Spanish words and phrases are easily understood. Glossary."–Horn Book

"'When Abuela, my grandma, tells me stories, we can fly anywhere.' The little girl and her grandmother, first seen flying over New York City in Abuela (1991), take off on another imaginary flight, this time to the Caribbean island where Abuela grew up. Isla is a tropical treasure."–Booklist

Every family has stories. When members of my family get together we inevitably swap stories. Some are funny, some not so, some we always remember, some are new-stories are a kind of glue that can both bind us together and bridge from here to there. Surely your family tells stories too, whether in recounting what happened to someone today or last year. People often share their stories without even realizing it.

Some of my family’s stories showed up in ISLA. Abuela is in part modeled after one of my high-flying grandmothers, and the way that storytelling carries Rosalba to other places in the book is the way my grandmother’s stories carried me. She had told me about growing up in another part of the world, another country, that was very different from the world I knew growing up. She told me about people that I never had a chance to meet. But they came alive in her stories. She flipped her hands around animatedly and her eyes were alight as she told me of a giant fish her brother had caught and brought home alive. Her stories, and several other family members’ stories, became parts of ISLA.

People have often asked me “what island is it, that you wrote about?” For those who know Puerto Rico, on seeing the illustrations they may well say “Ah, that’s Puerto Rico,” since Elisa Kleven, the illustrator, went there to get ideas for the brilliant illustrations. But when I wrote the story, having visited a number of tropical islands that in many ways could be “la isla,” I wanted the story to be “home” for as many people as possible. So I did not name the island, did not name what place it was. Home is the place each person builds it to be. Through your own family stories, I hope you can journey wherever you choose.