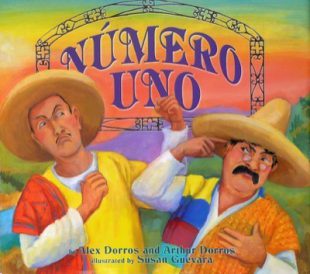 Which is more important, brains or brawn? Two friends, Socrates who is known for his keen intelligence and Hercules for his great strength, are always arguing about who is more important to their small village. The villagers, tired of the continuous argument, devise a clever contest to settle the question of who is number one, once and for all.

"The battle between brains and brawn is entertainingly pitched here between the architect Socrates Rivera ("soy intelligente") and the builder Hercules Hernandez ("soy fuerte"), whose village needs a new bridge. The Spanish dialogue...punctuates the story-hour-ready text with verve." —Horn Book

"Funny details abound, such as the animals' reactions to the goings-on and the dialogue on most pages: 'Yo primero! No, Yo primero!'" —School Library Journal

"The arguing is hilarious and the lesson learned upon the twosome's return is memorable. The text, with its Spanish asides, is a delight." —The Virginian-Pilot

I came up with the idea in sixth grade when the class was asked to write fables. I thought that these two characters, one with outstanding intelligence and one with exceptional brawn, would together create an entertaining story. It could also carry a valuable lesson, as fables do. The story was originally set in China, but to me it is universal. We later decided to change to a Spanish-speaking setting, which I am more familiar with.

I grew up bilingual, speaking English and Spanish and have visited many Latin American countries, including going to school there for a short while. Through high school, I enjoyed living in Seattle. I spend much of my free time going to the nearby mountains (like Hercules and Socrates do in the book), in my case to snowboard. I also create my own stories through taking photographs, a few of which have now been published.

In writing this book, the story stayed essentially as I originally had it, though we went through seemingly endless numbers of revisions and ended up changing details in the process. Writing a book with your dad is definitely not the easiest of tasks. At some points we reminded ourselves of the bickering characters in the story. Ultimately we were able to work together to create what I hope is a book you’ll enjoy.